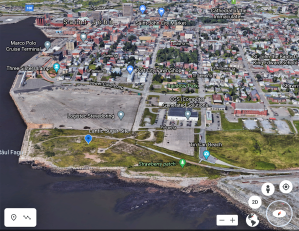 Site of Lantic sugar refinery erected in 1912 for the Atlantic Sugar Company to produce sugar and sugar products from cane sugar imported by ship from the West Indies. At one time the 13 ac. complex featured ten main buildings and assorted accessory structures, most notably a ten storey panhouse, ten storey filter house and a boiler house. Other buildings included a raw sugar storage building, a melt house and a refined sugar warehouse.

In 1984 the refinery was acquired by Montreal based St Lawrence Sugar, which operated the plant until 2000, when it consolidated its operations in Montreal. Over 300 jobs were lost at the time of closing.

The buildings were demolished and the property transfered to the City of Saint John in 2004. In 2008, City council agreed to sell the property to Irving Oil to help facilitate the development of Irving’s proposed World Headquarters at Long Wharf which involved Irving swapping the Lantic site with the Saint John Port Authority for Long Wharf. After some delay, Irving cancelled the proposed development citing changed economic conditions.

EXCERPTS FROM NEIGHBOURHOOD PLAN
note: link to complete neighbourhood plan can be found near bottom of page.

South Waterfront
Home to sweeping views across the Inner Harbour and across the Bay of Fundy to Partridge Island, the South Waterfront marks a transition in the South End Neighbourhood’s built form. The pattern of streets and blocks thins out approaching the southern tip of the Central Peninsula, making way for large swaths of vacant and underutilized lands including Port lands, the former Lantic Sugar Refinery site, and the Barrack Green Armoury lands. Historically, these lands have been used for military purposes, industrial uses, and as exhibition grounds. While the Armoury is still occupied by the Department of National Defense, the broader area is largely vacant and positioned for increased use. At the very tip of the South Waterfront lies Tin Can Beach, an increasingly important public waterfront amenity. Tin Can Beach is a naturalized urban area popular with local residents as a passive recreation space. Improved connections to established pedestrian networks like Harbour Passage will serve to further solidify the space as a community resource.

The Lantic Sugar Refinery site is municipally owned and one of the primary points of public access to the waterfront. Adjacent to industry, Port, and commercial uses, the site is both an exceptional opportunity to create new public open space and a strategic landholding. Efforts to rehabilitate the property as a new City-wide destination will position it to serve an expanded residential base for recreation, outdoor activity, entertainment, and tourism. If, in the future, the Barrack Green Armoury is determined a surplus by the Federal Government it could be acquired and rehabilitated, making it ideal for use as an educational, community, or cultural hub. Partnering with a major institution such as the University of New Brunswick Saint John, New Brunswick Community College, or other community groups would be essential to moving this type of project forward. Redevelopment of the South Waterfront would drive employment and draw people to the South End while better utilizing land.

Growth Concepts
DEVELOP A NEW RECREATION AND ENTERTAINMENT DESTINATION ON THE LANTIC SUGAR REFINERY SITE
The 4.5 hectare Lantic Sugar Refinery site is situated at the southern tip of the Central Peninsula. The refinery operated on the site for almost ninety years until its closure in 2000. The refinery and outbuildings were demolished in 2004 and the site has been partially remediated although the lands have remained vacant. The City owned waterfront parcel has the potential to be a transformative development site for the South Waterfront. Building on the success of Tin Can Beach, the southern half of the Lantic Sugar Refinery site could be naturalized to create new passive recreation opportunities and improve access to the coastline. The northern half of the site can be developed as a flat, paved surface to host concerts and festivals where noise impacts on the nearby residential neighbourhood would be diminished. To the west, there is sufficient land to develop a new commercial or recreational facility. Together, these initiatives would create a new hub on the Central Peninsula, drawing people and activity to the South
Waterfront.

slides will advance automatically or use arrows to navigate