Brunswick Brokers Limited is excited to announce that Brock Turner will be joining our growing team. Brock will be participating in our Commercial Real Estate Advisor Apprentice Program. In the short term, while apprenticing, Brock will be providing sales and marketing support to the Saint John team. Brock’s business and marketing background and previous hands-on experience will serve him well as he hones his skills in the commercial real estate industry.

Join us in welcoming Brock to the Brunswick Brokers team and we invite you to connect with him on LinkedIn https://www.linkedin.com/in/brock-turner

I’m so pleased to have represented Canadian Plasma Resources in the leasing of space at East Point Shopping in Saint John, New Brunswick. They will make a great addition to the tenant mix!

Canadian Plasma Resources (CPR) is a pharmaceutical manufacturer licensed by Health Canada and certified by the European Union and the International Quality Plasma Program. CPR collects quality plasma from healthy donors. That plasma is used for further manufacturing into therapies to treat a variety of health conditions.

CPR will be located beside FYI Doctors. The facility is currently undergoing renovations to meet stringent medical standards.  It is scheduled to be open to the public on or before January 1st, 2022.

Stephanie Turner of Brunswick Brokers represented the Tenant in this transaction.

Shantel’s Wagging Tails is owned and operated by Shantel Beck who carries the designation KPA CPT, CPDT-KA and is an active member of the Association of Professional Dog Trainers. Shantel’s Wagging Tails has been in operation since December of 2012. With the acquisition of this new property, Shantel will be relocating her business from the Maritime Opportunity Centre on Sand Cove Road. “I feel so fortunate to work in an industry that I love. Over the next couple of months, we will be renovating the property to accommodate our business. We hope to have our grand opening in September with the exact date to be announced later.”

She currently offers dog daycare, overnight boarding as well as training classes. This 7,792 square foot facility on close to an acre of land will allow Shantel to take on more clients by increasing her capacity for boarding and daycare. She also plans to expand her services to include grooming.

Her timing could not be better! According to a recent CBC article “All those new pet photos you’ve been seeing on social media don’t lie. The COVID-19 pandemic has prompted booming demand for pets from Canadians feeling isolated after months of social distancing. And that’s meant big opportunities for a slew of Canadian companies that cater to that craving for companionship. READ THE CBC ARTICLE >>> Pandemic isolation sees booming demand for pets — and for businesses that cater to them

1112 Fairville Boulevard was formerly occupied by Prime Material Handling who have relocated their business to 40 Stinson Drive in the Spruce Lake Industrial Park. Prime is the largest locally owned material handling company in Atlantic Canada, serving NB, NS and PEI.

Stephanie Turner of Brunswick Brokers was the listing agent and also represented the buyer in the transaction.

Brunswick Brokers Ltd is pleased to announced that they have successfully brokered a lease deal between Creative Art Multimedia Inc. (CAM)  and Project Group Ltd for 4,183 square feet of office/commercial flex space at 604 Rothesay Avenue. Built in 1912 as a car manufacturing facility, this beautiful building known as “The Maritime Singer Building” has been painstakingly redeveloped as modern commercial space all while maintaining much of its original unique character. The space featured high ceilings, exposed brick and beams, large energy efficient windows and in-floor radiant heat. Even the original 2 ton overhead crane is still in place.

According to Steve Belyea, owner of the building, “Very few people from Saint John know the history of the car that was made here”. The Maritime Singer Six car was a luxury vehicle assembled at this location in 1913 and 1914. It is believed that none of the cars survive today.  “The tenant Creative Art Multimedia Inc.(CAM) was an ideal fit for the property. It’s important to me that the history of the building be preserved and I thought CAM was such a good fit because, among other things, CAM is specialized in “TRANSPORTATION DESIGN ” and currently they are designing a prototype of new EV Ford F150 Raptor from this facility.

Winston Mendez (Founder & CEO) and Kamran Mohammed (Co-Founder & Managing Director) of CAM Institute of Design & Studio: “From the time we saw the building, we just fell in love with the space. We knew it would set the perfect tone for the launch of CAM, the first advanced design institute in Atlantic Canada that offers students a chance to work in the industry while completing their program. Additionally, the unique architecture of the building would set for the perfect backdrop for our latest design tools and technologies available for students.” According to their website, “CAM Institute of Design & Studio is a one-of-a-kind institute in Atlantic Canada to offer a combination of Communication and Industrial design programs. With over 25 years of collective experience, our team has curated a unique learning curriculum that prepares students to succeed in the continually evolving design industry. CAM offers programs like Transportation Design, VFX, Animation, Automation & Sculpting, Interior-Furniture & Retail Design, Graphic Design, Product Design and more.”

Brunswick Brokers Limited is pleased to announce that 661 Millidge Avenue in Saint John is under new ownership. The 1 story office building, located at the corner of Millidge Avenue and University Avenue has a 26,000 sq ft floorplate as well as a full basement. In addition to the 2.1 acre corner lot on which the building sits, the opportunity included a 2.3 acre surplus parcel across the street. Most of the surplus land is currently a paved parking lot which served as overflow parking for the office building. The property was listed for sale for $2,600,000.

Stephanie Turner of Brunswick Brokers was the Listing Agent representing the seller Inmar Promotions Canada Inc., which relocated to another building in the Saint John area. Jonathon Rasenberg of Coldwell Banker represented the buyer in the transaction and is also part owner of the buying group.

Brunswick Brokers Limited is pleased to announce that they’ve brokered a fourth sale in a series of sales by the Village View Limited Partnership group of companies to NexLiving Communities Inc. (formerly known as ViveRE Communities Inc.) in Saint John, NB . NexLiving is a Halifax NS based real estate acquisition and ownership company.

They announced recently that they were acquiring 49 Noel Avenue. The closing took place on June 30th, 2021. The 47-unit multifamily residential development, which was completed in the summer of 2020, is geared towards the over 55 year old demographic and is 100% tenanted. NexLiving previously purchased 41, 50 and 51 Noel.

The development known as Village View Suites is located in the growing suburban neighbourhood of Millidgeville and sits high up on the hill behind the Shannex Parkland Saint John facility. The development is not far from the city centre and in close proximity to prominent transit routes, the Saint John Regional Hospital and the UNB Saint John campus. The local developers, Stephen Brittain and Lee Seale have a proven track record of building a quality multifamily residential rental product which is in high demand in the region.

About Brunswick Brokers Limited: With an unparalleled understanding of the Atlantic Canadian commercial real estate market, Brunswick Brokers is a trusted advisor to both global corporations and homegrown East Coast businesses. Our team has decades of experience and proven success working with tenants, landlords, vendors and purchasers. We work closely and collaboratively with our clients to ensure their location becomes a key competitive advantage. With offices in Moncton and Saint John and experience in every corner of Atlantic Canada, we have our finger on the pulse of the East Coast.

BRUNSWICK BROKERS LIMITED is pleased to announced the leasing of 17 Canterbury Street in Saint John to SELECTPATH BENEFITS & FINANCIAL INC. The 2,381 square foot ground floor office suite in the iconic CentreBeam Place features exposed brick & beam architecture with a modern vibe. Ideally located in the heart of uptown Saint John’s business district, the space checked all the boxes for Selectpath and was practically move-in ready for them. The new tenant is making a few tweaks to the space and expect the office to be open in July. Todd Stephen, well known to many locals as President of the OMG Benefits Group will now serve as Vice President of Group Benefits and Pensions of the new organization.

Selectpath Benefits & Financial specializes in group benefits and pension, human resource management, HRIS and payroll. According to their corporate website, the company also has plans to open offices in Halifax and Toronto.

Are you interested in leasing office space uptown? Check out our listings at www.bbrokers.ca

This high quality industrial building was built in 2004 by Bourque Industrial and was later sold in 2009 to E.S. Fox Limited.

Located in the Spruce Lake Industrial Park and listed for $2,995,000, the 26,000+ square foot building sits on 27 acres of land (7 acres fenced and secured) and boast impressive 54′ ceilings, 4 cranes and in-floor radiant heat. The end of the building features a 40′ x 60′ folding “hanger” style door.

Although E.S. Fox has not used the building for several years, the property has been leased to a variety of local businesses. Tenants such as Lorneville Mechanical, Irving Oil and MSI Marine have all occupied the building for project based work in recent years.

Stephanie Turner of Brunswick Brokers was the listing agent.

A new business is coming to 73 King Street. Located near the top of King Street between the National Bank and Vogue Optical, this small storefront is the perfect location for Ami Tea. Featuring Bubble tea and sandwiches, this chain has locations in Quebec and western Canada.

According to their website Ami Tea  “offers you a wide selection of milk teas, fresh teas, and fruity teas. Our bubble tea is not just a drink, it’s an experience that brings people of all different cultures and backgrounds from all over the world together. Ami Tea is a symbol of friendship. Drink bubble tea, have fun, enhance collaboration, and enjoy the delicious taste today!”

In speaking with the new tenant, they hope to be open before Christmas but if not, you will certainly see them in the new year!

Congratulations to the another entrepreneur willing to open a business in uptown Saint John in uncertain times! 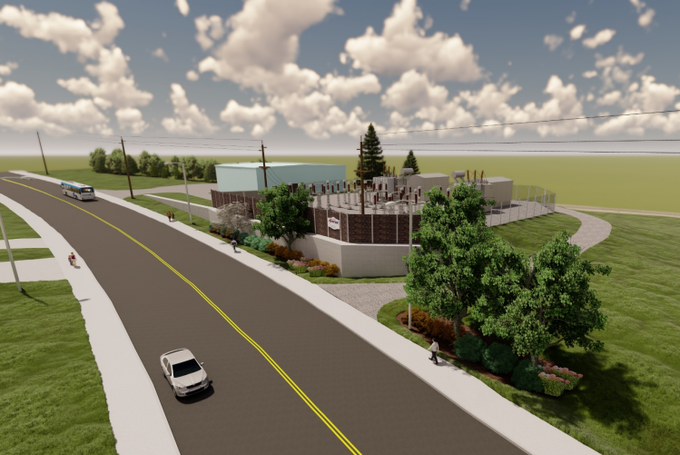