One of our clients is looking to sell some used office furniture. It is thought there are between 25 and 35 workstations. They would be happy selling all of it for the price of 25. The furniture is currently dismantled and in storage in Saint John but will be moved at the end of the month. All reasonable offers will be considered.

PHOTOS 1 & 2 SHOW THE WORKSTATIONS WHEN THEY WERE SET UP. 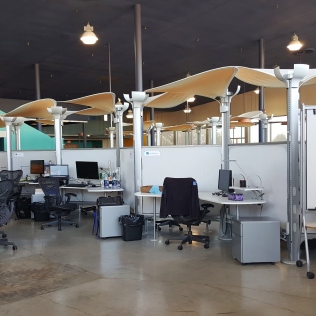 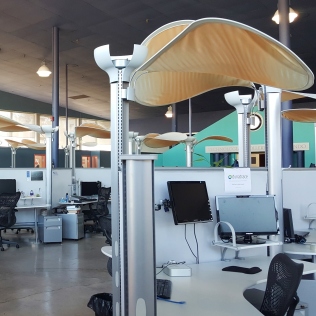 Please note, the chairs and filing cabinets are not part of what they have.

New technology to help market our commercial listings. Features of tour include floorplan, 3D “dollhouse” with walk around capabilities and measurement tool all accessible from bottom left corner of the software.
Try it now! Click image below!

Known as the Bank of Canada Building, the circa 1960’s office building with a mid-century vibe has sold. The property, strategically located at the epicenter of uptown Saint John’s business district, was acquired by an investor from Calgary Alberta. The property traded for $1,680,000

The Seller, Prince Williams Properties ULC, based in California, had owned the building for several years. Strong leasing activity in the building over the last 18 months meant that the building was almost fully occupied with a strong mix of tenants making the property more attractive to investors.

“I really appreciate the expertise and diligence of Stephanie Turner in securing the leases in a challenging environment and ultimately closing the sale on the property. It’s been a pleasure to work with her.” commented the seller.

In their own announcement earlier today, the buyer stated “At 34,500 sq ft and 12 units, it is the largest office building I have bought yet. But what is more impressive is the team of extremely competent pros that made this happen during the chaos of COVID19 over the past couple months.”

Although these are uncertain times, the property boasts tenants in industries such as law, tech and alternative energy which continue to perform well despite the pandemic.

Stephanie Turner was the Listing Agent and Milad Debly, Century 21 represented the Buyer. 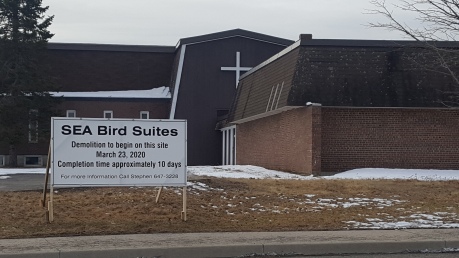 Two signs have recently appeared at the corner of Millidge Avenue and Daniel Drive in Millidgeville. Work is now scheduled to begin on a $17-million multi-residential development called “SEA Bird Suites”.

According to the sign, the demolition of the existing church and rectory will start on March 23rd and is estimated to last approximately 10 days. Anyone interested in the development can contact Stephen: 647-3228

Stephanie Turner represented both the seller and the buyer on the 1.94 acre property acquisition.

According to a recent article “Office, industrial vacancies decline across New Brunswick” published in the on-line Real Estate News Exchange.

“There were 43 office buildings with a combined gross leasable area of 2.51 million square feet surveyed in Greater Saint John.”

The overall office vacancy rate in our market decreased from 19.1% in 2018 to 14.07% last year. Despite this improvement, the vacancy rate is still considered higher than is desirable. A couple of explanations were given…

“The office market in Saint John is in some ways the victim of the city’s past economic success, which saw a number of urban shopping centres constructed in the 1960s and 1970s,” Baird Allen [manager of Turner Drake’s economic intelligence unit] explained. “When demand for retail space shifted away from these malls, they were converted to office space, so the city has a disproportionate amount of class-C office space for a city of its size.

“This oversupply is a contributing factor to the high vacancy rate. Other factors include the nature of the economy in Saint John, which has a strong industrial focus, as well as broader trends in how office space is utilized — going from individual offices to cubicles, and now to flex space and bullpen environments where employees work in communal spaces that require fewer square feet of office space per person.”

Read the entire article below which provides further insight in the Saint John office & warehouse leasing market as well as stats for Moncton and Fredericton.

Their current facility located at 295 Bayside Drive no longer meets their long term requirements. The facility has been listed FOR SALE but finding a buyer for this property is only the beginning. The search for a new location along with securing the necessary capital are key to the success of their relocation strategy. Please follow them on FACEBOOK or watch their WEBSITE. Information will be posted in the coming weeks regarding this exciting initiative!

The SJ SPCA Animal Rescue is non-profit and provides rescue, temporary housing, care and assistance to stray and unwanted animals in our community. They do their best to find loving, caring and responsible forever homes for all of the animals in their care. They also attempt to educate our community about responsible pet ownership and the humane treatment of animals.

Stephanie Turner is the Listing Agent for their current facility at 295 Bayside Drive.

Old-World Character Combined with New-World Engineering. A much sought-after location for any company seeking an unparalleled work environment of beauty and efficiency. 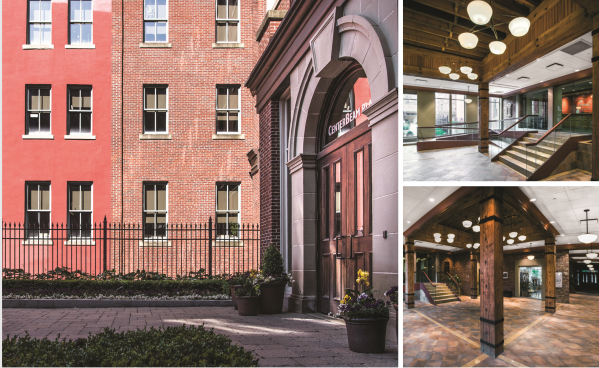 Directly on the heals of Commercial Properties Limited announcing they were moving their offices from the 4th floor of 58 King to a much needed/expanded space at the Red Rose building, we are pleased to confirm that the space has been leased to Hatch. The space is 2,932 square feet (located above the radio station on King Street) and needed very little in the way of leasehold improvements to meet Hatch’s needs. The space has some exposed brick and an open ceiling offering a modern industrial feel while maintaining much of the heritage character of the building.

Hatch supplies engineering, project & construction, business consulting and operational services to the mining, metallurgical, energy and infrastructure industries. They are relocating their office from the Marr Road in Rothesay to the uptown core.

“We see Saint John as a growth market for us and this new location brings us closer to two of our major clients while also providing additional amenities for our staff such as nearby parks, coffee shops and eateries.” commented Lorne Flowers from Hatch.

Please join me in welcoming Hatch to Uptown Saint John.

The church, hall and rectory located at the corner of Millidge Ave and Daniel Ave in Millidgeville has been sold. The property consists of 1.94 acres of land ideal for redevelopment.

The transaction closed earlier this week and the buyer is still ensure what the future holds for the property. I’m sure the neighbours will be watching with interest!

Millidge Avenue is a major traffic artery and leads to Saint John’s central business district less than 10 minutes away.

Development in the immediate area consists mainly of single family homes with some commercial/retail developments nearby as well as two senior’s complexes. The Saint John Regional Hospital and the University of New Brunswick Saint John Campus are also located in Millidgeville. From a recreational stand point, Millidgeville is well served with easy access to Rockwood Park (one of the largest municipal parks in Canada) as well as the Royal Kennebeccasis Yacht Club.

Stephanie Turner represented both the Seller and the Buyer

A 10,000+ industrial warehouse building and fenced compound in the Spruce Lake Industrial Park has been leased. The Landlord is Sandav Holdings Ltd out of St John’s NFLD. The property has had many used over the years including being the NB home-base for Household Movers & Shippers, a Coca-Cola distribution centre and most recently was leased to GFL Environmental Inc. Upgrades will be performed on the building and lands over the next few months. The new tenants expects to take possession around August 1st of this year.

Stephanie Turner was the listing agent.