The property at 200 Union Street, known by many as the former Academy of Hair Design, has new owners. 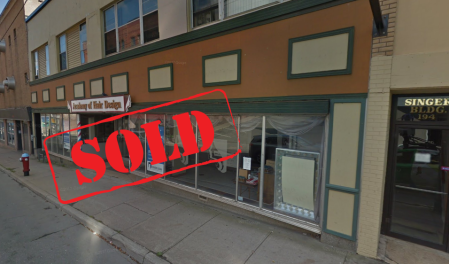 The property was purchased by a couple from New Brunswick. The property is commercial on the ground floor and has 6 residential units on the second floor. The new owners intend to use the ground floor for a new retail establishment. Details on that to come at a later date.

The building has a long history in Saint John. The original business was “Jacks Men’s Wear”. It was owned by Jack Levine and eventually his son Ellis Levine. Former Saint John Mayor Sam Davis designed the building for Jack Levine. You can still see the name “JACK” inlayed in a tile mosaic by the sidewalk near the main entrance.

This is just one more in a string of recent announcements about an exciting revitalization that is happening along Union Street and in the Waterloo Village area.

In 2014,  the owner of 200-206 Union Street received a small grant from uptown Saint John to redesign the buildings storefront. A concept for a new building façade was completed. The building is now eligible for a grant up to $5,000 or 50% of the cost to upgrade the front of the building. This opportunity is also available to a new owner.

The building is FOR SALE for $399,000. For more information click HERE.