60 Water Street, Saint John, NB (with before and after photos!)

“When we took the space over it was pretty rough. It took some hard work and elbow grease to get the space ready for brewing but we are thrilled with the end result.” says Mark McGraw, part owner and brewer.

The space had great bones with some exposed brick walls and one stone wall but what really attracted these young brewers to the space was the garage door. On nice days they’re going to throw open the overhead door and welcome everyone in. “We are well positioned to serve thirsty cruise ship passengers” said McGraw. Loyalist City Brewery will be one of the first businesses they will come across as they start touring the uptown and with the garage door open it should be very inviting for them to step in. “We’re already brewing a beer called “Parrtown Pale Ale” that has a Saint John story to it and I think tourists will enjoy hearing how the beer is connected to our heritage”.

Want to try their beer now? It’s on tap at Cask & Kettle and Five & Dime. Their brew will also be featured at NB Liquor next week in the Growler program.

Stephanie represented both the Landlord and the Tenant in the lease transaction.

NOTE: 60 Water Street is the back side of 125 Prince William Street a.k.a. “Le Faubourg” or originally known as “The Bank of New Brunswick”. The building is currently listed FOR SALE. Buy it now as an investment with this very cool tenant in place! 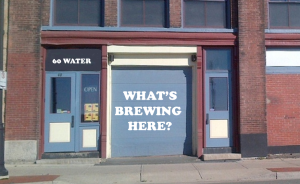 Something’s brewing at 60 Water Street but it’s probably not what you’re thinking!

More excitement and suspense for uptown… A brand new business leased space today on Water Street just steps from the corner of Princess & Water. Watch for an announcement and new signage in the not-too-distant future!

Moosehead should be at the head of King Street #91King

Moosehead is an institution in Saint John with a long history on the west side. That being said, it makes so much sense for them to have a significant presence in our business core as well. To commemorate the 150th anniversary of the Oland family’s brewing business, they announced today that they would be establishing a new “small-batch brewery” here.

According to today’s Huddle Story they are looking for a 10,000 square foot location “with hopes of finding one in the city’s uptown”. As fate may have it, 91 King Street has a 9,900 s.f. footprint.

Although I’m no graphic designer, I put my amateur skills to work to create an edited version of the corner of King and Charlotte. This location is perfect for Moosehead! Large enough, high profile and across the square from the new Irving Headquarters. To make it even more appealing, this corner is not subject to heritage regulations… giving any developer the utmost leeway in design.

In my humble opinion, Moosehead needs to take their rightful spot at the head of King!