Moosehead should be at the head of King Street #91King

Moosehead is an institution in Saint John with a long history on the west side. That being said, it makes so much sense for them to have a significant presence in our business core as well. To commemorate the 150th anniversary of the Oland family’s brewing business, they announced today that they would be establishing a new “small-batch brewery” here.

According to today’s Huddle Story they are looking for a 10,000 square foot location “with hopes of finding one in the city’s uptown”. As fate may have it, 91 King Street has a 9,900 s.f. footprint.

Although I’m no graphic designer, I put my amateur skills to work to create an edited version of the corner of King and Charlotte. This location is perfect for Moosehead! Large enough, high profile and across the square from the new Irving Headquarters. To make it even more appealing, this corner is not subject to heritage regulations… giving any developer the utmost leeway in design.

In my humble opinion, Moosehead needs to take their rightful spot at the head of King! 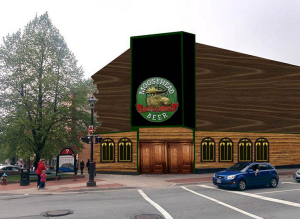