Old-World Character Combined with New-World Engineering. A much sought-after location for any company seeking an unparalleled work environment of beauty and efficiency.

The history of Saint John is deep and often fascinating. I recently listed office space for lease on the top floor of 58 King Street and came to discover that the building is referred to as the Skinner Building.

“The Skinner Building was built in 1877 for clothier William Doherty. Alfred Skinner was the proprietor of a carpet wareroom in the building from the early 1880’s until the Great Depression in 1929.

After the “great fire”, Skinner started out on his own accord at 68 King Street. His business became too large for the premises so he relocated to this building. It was stated in the 1880’s that in Saint John there was no name more familiar in the households than “Skinner’s warerooms”.

He had many contracts for supplying carpets to hotels and public buildings throughout the Maritimes. In the early 1900’s Skinner’s was proclaimed to have the largest retail stock of floor coverings in Canada. ” READ MORE Source: www.historicaplaces.ca

Need office space? JUST LISTED: Located on the fourth floor, this 2,932 sf suite features exposed brick walls and modern/industrial vibe. Its layout comprises a reception / waiting area off the elevator, one private office, a spacious glassed-in boardroom, kitchenette and plenty of open space for workstations. Rich with character, this space will not last long – don’t miss out! 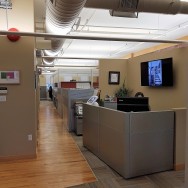 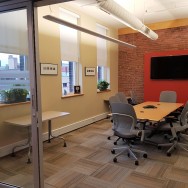 This iconic building was constructed in 1903 for the Red Rose Tea Company. Full restoration and conversion into offices was completed in 2001. Located in Saint John’s Central Business District with monthly and hourly adjacent surface parking.  For more info on building and other suites available CLICK HERE 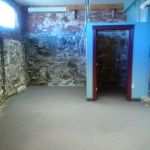 The Buckley Building has been sold. The new owners intend to convert the top floor to residential for their personal use and add a rooftop patio. The building is a three storey brick Italianate-Style commercial building on the east side of Germain Street.  The view from the roof affords a unique urban view directly down the newly renovated Grannan Lane as well as a view of the harbour.

The Buckley Building is significant as one of a collection of commercial, Italianate and Second Empire buildings that were built between 1877 and 1881 after the great fire.

The building is also significant because it housed the office of G. Ernest Fairweather from 1888 until 1920. G. E. Fairweather was a prominent architect and he designed many significant buildings in Saint John. He was originally associated with John Magee, as Magee and Fairweather, and in their office the plans were prepared for a great many of the buildings erected after the great fire in 1877.  Source: historicplaces.ca 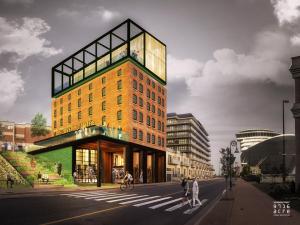 The owners of #222water recently engaged local firm Acre Architects to provide concept drawings for the property. An engineering report conducted on the building identified that, structurally, the building could accommodate two additional floors and Acre took a very innovative approach to incorporating this in to their proposed design.

In the CBC interview Stephen Knopp of Acre suggests some uses could include a distillery, an “exploratorium” or science centre and/or event space to name a few.

The Case for an 11 Storey Building on King’s Square

Have you ever wondered how the boundaries of the Trinity Royal Conservation Area were decided? The boundaries are purely arbitrary and, I can only assume, were voted on by the Heritage Review Board when it was first established in 1982 or by some other elected body that the citizen’s of Saint John put their trust in at that time. Read Wikipedia info HERE

Below is a section of the Trinity Royal map END_OF_DOCUMENT_TOKEN_TO_BE_REPLACED

“Heritage Knowledge Park”…what is it?

“Heritage Knowledge Park” is a branding initiative currently picking up steam in Saint John’s uptown business community. It loosely translates to “creative companies doing business in close proximity to each other in very cool old buildings”. The initiative is being spearheaded by Enterprise Saint John and I personally think they’re on to something!